I noticed that the 1 gallon water bottles that supply the trays for the Romaine Lettuce, Broccoli, Swiss Chard, Cauliflower, and Kale that are in robust growth mode were all empty. I refilled the water bottles, and then measured the pH and dissolved solids (DS). Based on the results, I added more plant food for two of the trays before their scheduled feeding. I also harvested some Swiss Chard, Kale, and Arugula since the leaves were blocking the smaller plants in the trays.

AeroGarden Farm 02, Right Tray, Day 38. Romaine Lettuce (seed pods from AeroGarden). All plants are growing robustly. A second batch of leaves harvested yesterday (used for Caesar Salad). I noticed that the tops of some leaves were turning black. Research said to check pH (4.34) and dissolved solids (381 ppm). The pH should be between 5.5 and 6.5, and the dissolved solids between 500-700 ppm. So I added plant food before the next scheduled feeding in 4 days. The pH is now 5.7.

AeroGarden Farm 03, Left Tray, Day 38. Broccoli, Swiss Chard, and Arugula (seeds from Botanical Interests). All Broccoli plants sprouted, but growth for two are being crowded by the Swiss Chard plant. Only one of the Swiss Chard plants sprouted, and is growing robustly. It was moved to position L10. Positions L03-L06 were plugged. The Arugula in position L11 an L12 came from a different Farm tray. After the picture was taken, harvested leaves from the Swiss Chard and Arugula plants. Measured the pH (6.16) and dissolved solids (312 ppm). The pH was OK (should be between 5.5 and 6.5), but the dissolved solids were low (should be between 500 and 700). So added plant food before the next scheduled feeding in 4 days. 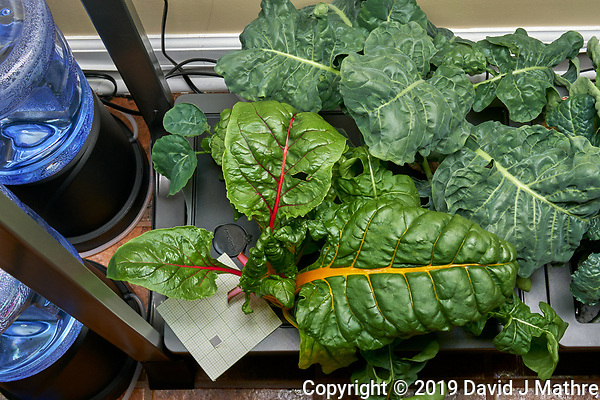 AeroGarden Farm 03, Right Tray, Day 38. Cauliflower, Kale, and Cilantro (seeds from Botanical Interests). All Cauliflower plants sprouted, and are growing robustly. Two of the three Kale plants sprouted, and are growing. All Cilantro plants sprouted but are growing slowly. The Kale was moved to positions R07-R08 and will try to start another Kale plant for position R09. The Cilantro was moved to the front three positions R10-R12. Positions R04-R06 were plugged to allow more space for the Cauliflower and Kale. Measured the pH (6.50) and dissolved solids (562 ppm). The pH and dissolved solids were OK, so will wait until the next scheduled feeding. The cauliflower plant at R02 leaves were turning brown, so it was removed. The Cilantro plants are growing slowly and were being crowded by the larger Kale plants so were moved to a different Farm tray.

Daily Electric Energy Used (63.2 kWh) from Sense and Daily Solar Electric Energy Produced (7.1 kWh) from SolSystems and Locus Energy. Clouds and rain most of the morning. At this time of the year the sun is lower, and the Sycamore tree leaves shadow the solar panels in the afternoon. Overall a net deficit of 56.1 kWh.

I am a scientist, photographer, and world traveler. I worked for 27 years in the Pharmaceutical Industry. Now I spend my time as a full-time photographer and world traveler. Since retiring from Merck in 2012, I’ve visited nearly 50 countries — many while on Semester at Sea voyages. My photographic interests include travel and the natural world. I strive to take and post at least one image every day. I also post images taken on this day of the year from the past 10+ years. I am always investigating new cameras, lenses, and photographic techniques as well as image processing techniques. I include information (what, where, when, why) and how images were processed. Most images are available for purchase — either as prints or rights managed at my PhotoShelter Gallery. Comments or questions about the images on my photoblog or gallery are always welcome.