Last night I got an e-mail link to the June 2011 Newsletter from Tuner Photography. The first thing I noticed was the image of an old car in front of the Cow Canyon Trading Post in Bluff, Utah. I remembered taking a snapshot of this vehicle as we were driving by back in February 2008 as part of an Elderhostel (now Road Scholar) Photography Workshop I was attending with my father and brother. Ever since I have wanted to go back to spend some more time in Bluff. Since then based on Winston’s image it looks like the Cow Canyon Trading Post has added a Gallery. If you do a search on the Internet you see a number of images of the Cow Canyon Trading Post and this old car parked out front. Back to Winston’s Newsletter — How to be creative where many have (and/or are) taking images from the same location. I remember a session at Delicate Arch where it seemed that the tripod positions were so used that they were marked in the rocks.

I’ve attended several workshops with Winston, and recommend him as a teacher. As a new digital photographer, I learned a lot during his workshops, both out in the field and back in the classroom “after the click” processing the images. It is because of a comment he made during one of his workshops that I try to share at least one image a day (preferably one taken on that day). I  started doing this on Facebook, but after dropping Facebook it morphed into my “Images of the Day” photo-blog. I do recommend that you also to sign up for Winston’s monthly Tuner Photography Newsletter. Some day I hope that I can attend his Balloon Festival Workshop in Albuquerque.

Below are two versions of  the image I took of the old car in 2008. I admit it is a snapshot or “grab” as I was in the back seat of a van and we were moving when I took the picture. One in color, the other converted to B&W with Nik Silver Efex Pro. Is this just a historical picture from somewhere I have been, or something artistic. I am still digesting Thom Hogan’s 20-June-2011 essay “How Thick is Your Skin”

Back to the images of the old car — I think that it is a Buick from the mid-50’s but am not sure. If you can identify the make/model and year let me know.

An additional example of the new NIK  Silver Efex Pro 2  plugin for Photoshop and Lightroom. The image of the Cow Canyon Trading Post was taken on day 3 of the 2008 Elderhostel “Photography in the Southwest” workshop at while driving through Bluff Utah. The first image was converted to B&W using Silver Efex Pro 2. The second image is the original RAW image processed with Capture One Pro 6. 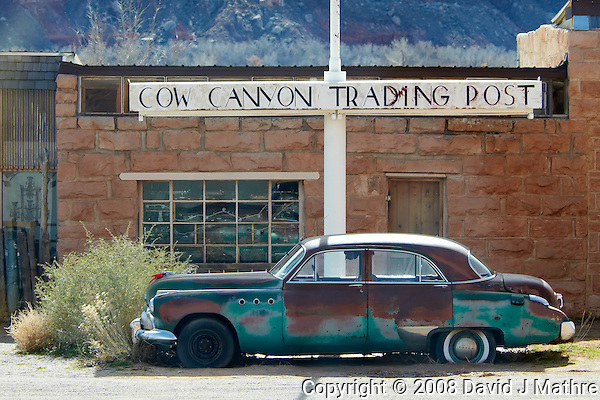 An additional example of the new NIK  Silver Efex Pro 2  plugin for Photoshop and Lightroom. The image was taken on day 2 of the 2008 Elderhostel “Photography in the Southwest” workshop at Kelly Place in Cortez Colorado. The first image was converted to B&W using Silver Efex Pro 2. The second image is the original RAW image processed with Capture One Pro 6. Lighting for this image is sunlight coming in through the roof entry and a gold reflector.

The Elderhostel “Photography in the Southwest” workshop was based at Kelly Place B&B just outside of Cortez Colorado. This is a great location in McElmo Canyon, quiet and remote. It borders Canyon of the Ancients National Monument. The following images were taken in and around Hovenweep National Monument in Utah.