We have two days at sea while traveling from Cabo San Lucas in Mexico to Puerto Quetzal in Guatemala. Most of the day was spent in the classroom with Michael. Images for the day include sunrise, sunset, and photography workshop members while at sea.

Comparison of Digital Noise Reduction Programs. Pre-dawn view of the Moon, Venus (and Mercury) over the Pacific Ocean. Professor Ian Campbell had us look for the moon and several planets in close proximity. Here are a couple of images taken with a Nikon D3x and 85 mm f/1.4 lens (ISO 1600, 85 mm, f/1.4, 1/30 sec). I needed the high ISO to even get a 1/30 sec exposure since it was still dark and the ship was moving. For each image I processed with no digital noise reduction, then with either NIK Define 2.0 or Topaz DeNoise 5.0.

A series of 12 telephoto images of a fisherman with the sun rising. The images were taken from deck 7 of the Semester at Sea MV Explorer while anchored off Cabo San Lucas, Mexico.

We arrived at Cabo San Lucas early in the morning well before sunrise. My other post for the day documents the sun rising. The shadow self-portrait was taken during the sunrise session.

Rather than docking, the ship anchored off shore and then used the life-boats as tenders to transport the passengers to and from shore. There were some swells that rocked the ship making the transfer from the MV Explorer to the tender difficult, and a very slow process. Folks that were supposed to leave the ship at 07:00 didn’t leave until after 09:00.  During the day I took a series of images of the Arch at Land’s End as viewed from my cabin window, with a Norwegian Troll sitting at the window. 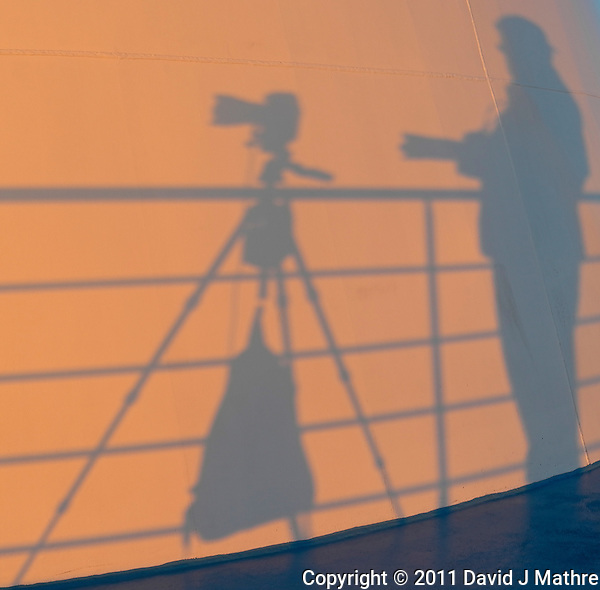 We were out on deck early to catch the sunrise. There was a bit of confusion about what time sunrise would be since the ship changed to Central Mexican time zone overnight. Was the sun going to rise at 05:07 hr or 07:07 hr. It turned out to be 07:07 hr, which makes sense since we are on the west side of the time zone.  We then spent the day in class: “Welcome Orientation & Workshop Introduction”, and “Components to Travel Photography” taught by Michael Mariant. We are scheduled to arrive in Cabo San Lucas tomorrow morning. At the end of the day a fog bank came in just before the sun set.

[Posts will be limited while on the M/V Explorer due to narrow internet bandwidth.]